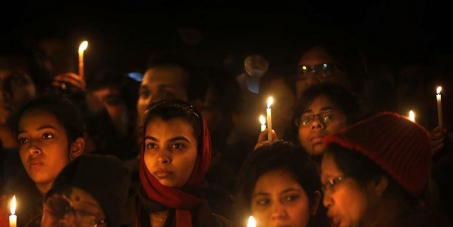 Purge violence against women from our government!

By continuing you agree to receive Avaaz emails. Our Privacy Policy will protect your data and explains how it can be used. You can unsubscribe at any time.
This petition has been created by Srikant S. and may not represent the views of the Avaaz community.

Sign this petition
Srikant S.
started this petition to
Pranab Kumar Mukherjee, President of India,
Leaders of Indian political parties
Over the past few weeks, I -- like all of you-- felt frustrated & helpless about recent developments in Delhi. I kept thinking about what could be done -- maybe something small, but something specific. Here's that something!

Change needs to be led by the very top of our government but currently we have two MPs and 42 MLAs who are charged with crimes against women. What kind of example does this set? There are tens of thousands of us demanding change, so join me in asking the heads of the Indian political parties to rid their parties of the members who have demonstrated they're part of the problem, not the solution. We are setting a deadline of 26th January, India’s Republic Day, as the date to save our Republic from this violence inherent in the system and ensure a safer India for women.

We all feel the anguish and anger, but we can do something about it. Sign the petition to President Mukherjee and the heads of the political parties -- the people we elected to represent us -- demanding that they step up in the fight against women or step down and make way for a future laid with a foundation of respect and safety for every Indian citizen.

Today: Srikant S. is counting on you

Srikant S. needs your help with "Purge violence against women from our government!". Join Srikant S. and 18670 supporters today