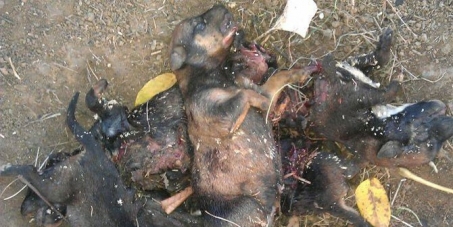 This petition is closed
52,526 have signed. Let's get to  75,000
52,526 Supporters
Lesley B.
started this petition to
Milorad Veljovic - General Police Director
We demand immediate action is taken against the Children who burned, cut and stomped to death nine puppies in Resnik, Serbia.
This is atrocious and disgusting that children are capable of an heinous act against 9 little puppies and we demand action right now leading to the arrest and responsibility of these murderers!!

The facts are that children that hurt and kill animals have the potential to grow up to be serial killers, they get the taste of killing with animals and eventually resort to humans.

These babies did not deserve this and the unimaginable pain and horror they went through in their last moments of life is just so heartbreaking and sad. Animal lover and activist Lana Dordevic commented " We are appalled by the news that the children did this crime and murder. Children should be placed in a psychiatric institution, because if the child 10-11 years are able to cut puppys with a knife, to burn and finally stomp them , there is a serious need for psychiatric treatment, and this needs to be taken seriously."

Just because they are children doesnt give them the right to get away with this horrible crime! The children and parents should be held accountable!

We know the picture is very disturbing and graphic but gives you some idea of what these babies went through.

Please lets not forget these babies and get them justice!!.

Please sign the petition if you want to see these puppies get justice. Thank you
.
3 Total Comments Photo: Facebook / Marina Savic commented "When enough data is collected, it will be criminal charges will be raised and the responsible will be charged with a criminal offense of torture, abuse and murder , unofficially informed by sources close to the police investigation, which was launched on the occasion of lynching puppies in Resnik. To our knowledge, it was confirmed that the boy's uncle is an officer at the police station in Resnik, so it is assumed that the boy's mother, who threatened police if anyone reported her son thought it would get him some protection

.Another officer who was also at the scene described the disgusting scenes that he found, but was surprised that the boy was capable of such an act, because he knows him as a quiet child.

The photographs show that some of the puppies were living at the time of ignition and torture , and the autopsy will not be done because it is clear in what state were brought, according to our source who wished to remain anonymous.

Today: Lesley B. is counting on you

Lesley B. needs your help with "Demand action is taken against Children who tortured and murdered nine puppies". Join Lesley B. and 52526 supporters today