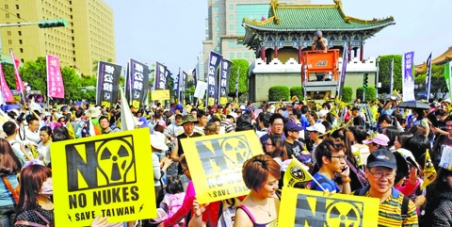 This petition is closed
74 have signed. Let's get to  100
74 Supporters
C
started this petition to
Premier Jiang Yi-huah, Republic of China (Taiwan)

Taiwan continues construction and use of nuclear power plants.

Given the particular unpredictability of earthquakes, the unknown extent of possible tsunami and typhoon damage and with the Fukushima Daiichi nuclear disaster (in nearby Japan) in mind, the clock has already stopped ticking and alarm bells are ringing. We seek to continue to sound the alarm on Taiwan's government, asking it to:

end use of nuclear power

rapidly implement a sincere, secure plan to make a nuclear-free Taiwan a reality

Some numbers and background:

The Fukushima evacuation zone raises the issue of what would happen during an evacuation in heavily populated northern Taiwan during a nuclear accident. If there was a threat of a radiation leak, the government does not have the capability to evacuate the entire area that would be at risk.

4.5 to 10 million people, in heavily populated northern Taiwan, could be exposed to radioactive fallout from a nuclear accident on a similar scale to that at Fukushima Daiichi.

Operating nuclear plants is not the safest way to generate energy and carries the risk of causing irreparable consequences.

The costs, to date, of the Fukushima nuclear disaster have risen to hundreds of billions of dollars (US$). With far greater numbers living within 82km of Taiwan's northern nuclear power plants, the costs of Fukushima only represent a fraction of the costs of a similar disaster in Taiwan.

Nuclear power is not the cheapest source of energy, considering the cost of disposing of nuclear waste, decommissioning a plant and cleaning up the construction site. Added to this, Taiwan is not in a position to handle nuclear waste.

Many safety issues have been discovered at the fourth nuclear power plant during its construction, issues compounded by the fact that Taiwan Power Co (Taipower, 台電) is not experienced in integrating components, made by different companies, for the plant.

Concerns that the operator has withheld information about safety violations have been raised and there is a general lack of confidence in the government’s regulatory mechanisms.

Alternative and renewable sources of energy are available and continue to be researched. Use of solar energy, for example, poses a much, much smaller risk of irreversible consequences. Taiwan is the second-largest producer of solar panels in the world. Taiwan's government has already promoted and invested in use of renewable energy. Dedicated continued investment and development in this sector creates the opportunity for employment in green jobs and for Taiwan to take a leading position in energy technology and production.

Nuclear disasters, such as that in Fukushima, can be avoided.

The welfare of the entire population and life on the island of Taiwan is at stake.

The current Taiwanese government, as well as future governments, would do well to commit to a nuclear-free Taiwan.

This is an issue that not only concerns those living in Taiwan. This issue concerns all global citizens. Like that in Fukushima, the cost to life and the socioeconomic cost of another nuclear disaster is unacceptable.

Continued construction of nuclear power plants and their subsequent operation, as well as continued use of operational plants, in Taiwan, can be stopped.

Here's what we do:

Shine a light on Taiwan. Take this issue beyond Taiwan's shores. Give support to the health and well-being of your fellow citizens. Share this petition with everyone you can. This is an issue that not only concerns those living in Taiwan. This issue concerns all global citizens. Another nuclear disaster is preventable. Together, we can put a spotlight on Taiwan, work towards a victory of cancelling the completion and operation of Taiwan's fourth nuclear power plant and end the use of nuclear power in Taiwan. After all, that would be better than Taiwan basking in an atomic afterglow.