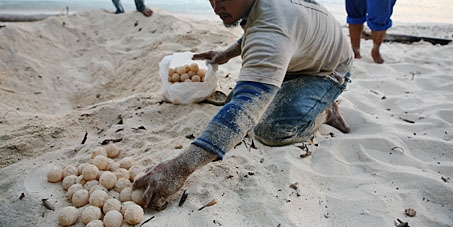 Save the Sea Turtles of Sangalaki!

By continuing you agree to receive Avaaz emails. Our Privacy Policy will protect your data and explains how it can be used. You can unsubscribe at any time.
This petition has been created by Thomas R. and may not represent the views of the Avaaz community.

Sign this petition
Thomas R.
started this petition to
Mr. Darori Wonosipuro, General Director for Forest Protection and Nature Conservation (Ministry of Forestry),
Mr. Novianto Bambang, Director for the Conservation of Biodiversity (Ministry of Forestry),
Dr. Toni Ruchimat, Director for the Conservation of Areas and Fish Species (Ministry of Marine Affairs)
The island of Sangalaki is one of the most important nesting islands of the green sea turtle in Indonesia. However, the local sea turtle population is currently less than 10% of the population 60–70 years ago. This is mainly the result of decades of excessive, professionally organised, and highly profitable collection of eggs from the nesting beaches. Without appropriate conservation measures, the population will be extinct in a few decades.

In 2002, the Turtle Foundation, an international organisation for the protection of sea turtles, achieved together with other conservation organisations that the national ban on green sea turtle egg collection, which exists since 1999, was finally also enforced on Sangalaki. Together with our local partner organisation Yayasan Penyu Berau (YPB) and with official permits we constructed a ranger station to allow year-round monitoring of the nesting beaches. Since then, egg theft was virtually eliminated on the island, and for the first time in decades sea turtle babies again hatched on Sangalaki and made their way to the sea.

It came as a total surprise when last September the local government ceased this conservation programme. Since then, the situation there obviously is going badly awry. The local conservation agency KSDA, who wanted to continue the conservation programme, seems to be unable to protect the turtle nests. According to information from the WWF, each of the 10 to 15 nests which are laid each night on Sangalaki are now immediately excavated and sold, despite the fact this is against Indonesian law which protects turtles and eggs. This corresponds, according to a market price of 10,000 Indonesian rupiah per egg (ca. 1 US$ or 0.8 EUR), to a daily sales value of 930–1,400 US$, adding up to 30,000–42,000 US$ per month!

In addition, a diving resort was recently re-opened on Sangalaki, whose new operator obviously has little appreciation for the conservation of the island and its sea turtles. Waste is deposited in the adjacent forest and recent construction measures disturb the island’s sensitive ecosystem. Plans for further expansion of the resort include construction plans that are totally oversized for this small island, which is officially protected in a way that allows only limited economic utilisation.

Please sign this petition to help protecting Sangalaki and its sea turtles!

Today: Thomas R. is counting on you

Thomas R. needs your help with "Save the Sea Turtles of Sangalaki! ". Join Thomas R. and 2789 supporters today