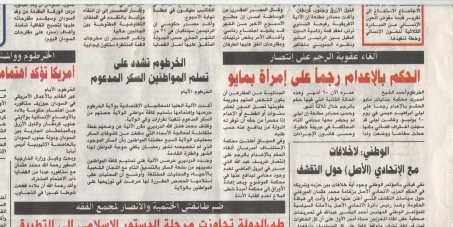 Layla’s life is still in danger. We need you to take action to save her.

Layla Ibrahim Issa is a 23-year old mother who was sentenced to death by stoning by the Mayo court in Khartoum, Sudan. We put out an action alert to support Layla earlier this month, and we extend our thanks to those of you who raised their voices; but Layla is still in prison with her 6-month old child.

The authorities have not yet responded to our demands to immediately repeal the verdict, and stop the planned execution.

We need to raise our voices even louder to have them both released!

Stoning is a horrendous form of torture, and Layla's sentence is a clear violation of the rights guaranteed to all Sudanese citizens by Sudan’s constitution, as well as Sudan’s voluntary commitments to human rights treaties. Holding Layla’s child is a direct violation of Sudan’s responsibilities under the Convention on the Rights of the Child, which Sudan has signed and ratified.

Around the world, governments, religious leaders and civil society are converging to denounce stoning as unacceptable. Let’s add our voices to the global movement, so that stoning can never again be considered a legitimate form of punishment.

By signing this petition, you are directly supporting Sudanese women’s rights activists and civil society who are campaigning for Layla’s and her baby’s release; for their fair treatment; and for an overhaul of the Sudan Criminal Code (1991) to repeal the article prescribing stoning as a punishment for consensual sexual relations outside of marriage.

Take action! Join us to help save Layla’s life before it is too late!