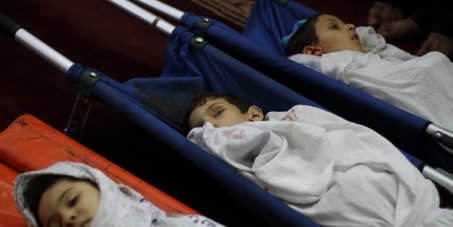 By continuing you agree to receive Avaaz emails. Our Privacy Policy will protect your data and explains how it can be used. You can unsubscribe at any time.
This petition has been created by ELLA C. and may not represent the views of the Avaaz community.

Sign this petition
ELLA C.
started this petition to
The Member States of the United Nations
Israel has, for the last 60 years, consistently breached international laws:

4. Apartheid via a legalised system of discrimination against Palestininan Arabs, contrary to International Convention on the Suppression and Punishment of the Crime of Apartheid (1976);

9. Construction of a walled separation barrier in Palestine, contrary to an advisory opinion of the International Court of Justice in 2004 (http://www.icj-cij.org/docket/index.php?pr=71&code=mwp&p1=3&p2=4&p3=6)

In the event that the UNSC does not fulfill its duty to maintain international security by being unable to decide how to act, unable to agree how to act, or simply failing to act, then the Member States in the form of the United Nations General Assembly (the “General Assembly”) are required to request, within 24 hours, by a majority vote of the Member States, an "Emergency Special Session" of the General Assembly, in order to immediately address the threats to international security.

As the voting power of each member of the General Assembly is equal, only a majority of the votes is needed here in order to pass a resolution which the Security Council would be very obliged, in the face of international political scrutiny, to heed.

WE, THE POPULATION OF THE WORLD, MUST APPEAL TO OUR GOVERNMENTS TO REQUEST THIS EMERGENCY SPECIAL SESSION AND DEMAND THAT THE SECURITY COUNCIL IMPOSES AN ARMS EMBARGO, ECONOMIC SANCTIONS AND MILITARY FORCE, AGAINST ISRAEL, TO STOP ITS CONTINUED BREACHES OF INTERNATIONAL LAW AND ILLEGAL WAR AGAINST THE INNOCENT PEOPLE OF PALESTINE!!! THIS IS NO DIFFERENT TO SOUTH AFRICAN APARTHEID!!! THE UNITED NATIONS TOOK ACTION THEN, IT NEEDS TO DO THE SAME NOW!!!