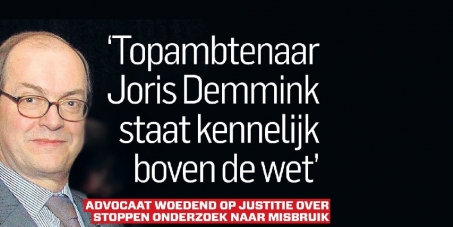 To start an investigation regarding all the accusations concerning Mr. Demmink

By continuing you agree to receive Avaaz emails. Our Privacy Policy will protect your data and explains how it can be used. You can unsubscribe at any time.
This petition has been created by Anonymous Anonymous N. and may not represent the views of the Avaaz community.

Sign this petition
Anonymous Anonymous N.
started this petition to
Members of the Dutch Parliament
The current Secretary-General of Justice, Mr Joris Demmink, has been suspected of child abuse for 14 years now. We request the members of Parliament to take the following measures:
1. To start an investigation regarding all the accusations concerning Mr Demmink.
To guarantee the independence of this investigation there should be independent journalists, chosen by us, which will participate in the inquiry. They will investigate any allegation that has been made in the past of the present.
2. Mr. Demmink will be suspended and remain inactive until any research has been completed about this case.
3. That stronger and more severe punishment will be laid upon government officials who use and/or abuse their power or who commit crimes as members of the government.
Government officials are supposed to set an example for the public, and therefore we believe they should be punished as least twice as hard.