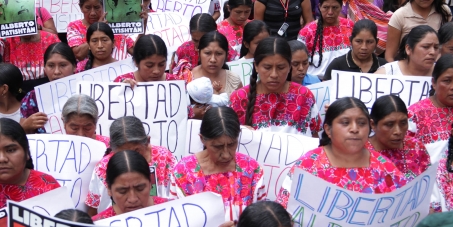 By continuing you agree to receive Avaaz emails. Our Privacy Policy will protect your data and explains how it can be used. You can unsubscribe at any time.
This petition has been created by Barbara D. and may not represent the views of the Avaaz community.

Patishtán is a Tzotzil indigenous schoolteacher, who was politically active in his community until he was arrested on June 19th 2000 and unjustly sentenced to 60 years in prison. While incarcerated, he continues to fight for justice, organizing prisoners to demand humane conditions inside the prisons of Mexico. The Mexican government tried to put an end to this struggle by isolating him in a maximum security prison where he suffered various forms of torture. Thanks to the intervention of civil society a year later, he was returned to a prison closer to his family. Patishtán was awarded the “jCanan Lum Prize” in recognition of his struggle for "social transformation in a peaceful manner". His home community continues to demand his freedom to this day.

Patishtán suffers from a brain tumor that is causing him to loose his vision. Although he underwent surgery six months ago, the conditions within the prison do not allow for his recovery.

In spite of all this, he has not given up and continues to struggle. When his case reached the Supreme Court in Mexico, one of the judges publicly stated that Patishtán is innocent and should be released immediately. Unfortunately, the Supreme Court ended up sending his case to another court which will decide this month whether or not he will be released. The Mexican judicial system, however, is discriminatory in general and Patishtán is indigenous. Therefore, public support is vital to see that justice is finally achieved and Patishtán is freed.

Patishtán is currently fasting inside the prison and is calling on civil society to speak out to demand his freedom.

Please sign this petition and share it with everyone!
Report this as inappropriate
There was an error when submitting your files and/or report.
Inaccurate Inappropriate language Hate speech Illegal Commercial/spam Offensive
×

Today: Barbara D. is counting on you